Please login first to save in your collection.

SAVE TO MY LIBRARY

Migratory birds are nature's marathon runners. They trek between their summer and winter homes each year, some flying to the end of the earth and back again. Certain species can travel for days without eating or sleeping - but eventually they all need a place to rest and refuel.

For the birds that migrate along the Pacific Flyway, which stretches thousands of miles from the Arctic to Patagonia, California's Central Valley was once the ideal pit stop. Its lush wetland terrain supported tens of millions of birds on their annual pilgrimage. But today, more than 95 percent of those wetlands have disappeared, lost to farmland, urban sprawl, an overburdened water system and extreme drought.

Climate change is putting pressure on migratory species, shifting and compacting their ranges. A 2014 study found 90 percent of North American shorebirds surveyed, most of which migrate along the Pacific coast, were expected to face an increased risk of extinction due to climate-driven threats.

"Birds are under a lot of stress," says Mark Reynolds, lead scientist for The Nature Conservancy's migratory bird program. "They're flying around looking for habitat and mostly not finding it."

To protect birds that are always on the move, The Nature Conservancy looked to pioneers of the sharing economy, such as Uber, Airbnb and Zipcar. If short-term deals can work for cars and condos, why couldn't it work for conservation?

With this model in mind, the Conservancy rolled out an innovative program called BirdReturns in 2013. Combining images from NASA satellites, data from citizen scientists and land rented from local rice farmers, the program provides pop-up habitats when and where birds need it most. 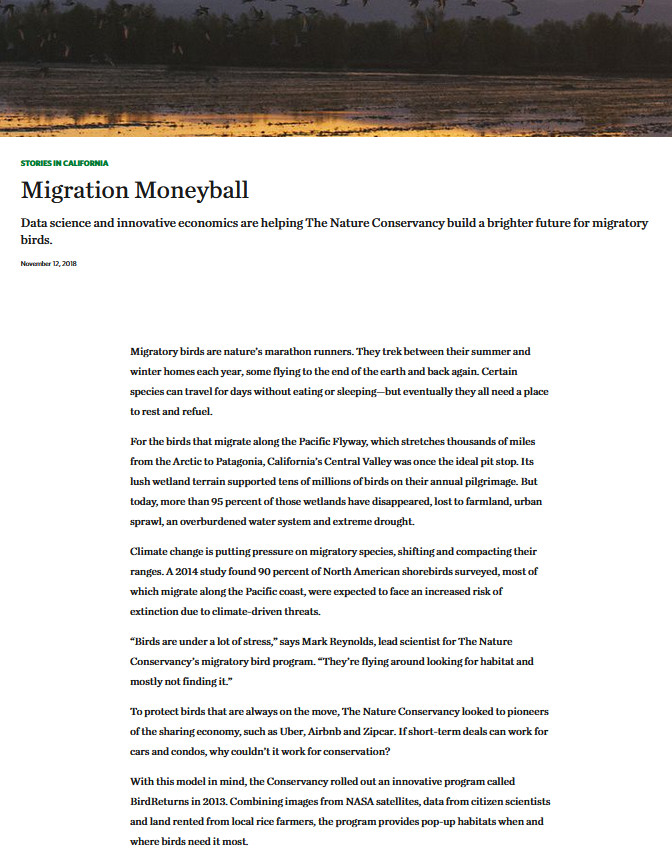 Use this form to customize and generate the code you need to display this content in your own environment - no programming required. The feed will inherit more specific styles, like font face and font color, from your website.

Please use the form below to provide us with your recommendation, and we'll check it out. Include your name and email address along with your suggestion just in case we need to get in touch. Thank you for contacting us.

In December 2020, the S. D. Bechtel, Jr. Foundation concluded operations. Founded in 1957, the Foundation was committed to building a productive, vibrant, and sustainable California. In 2009, the Foundation decided to invest all of its assets, or spend down, by 2020 in order to spur significant progress on the challenging issues facing the state in education and environment. This collection features knowledge produced by the Foundation and its partners during its final decade of work. Read concluding reflections from the Foundation's president and learn more about its grantmaking.